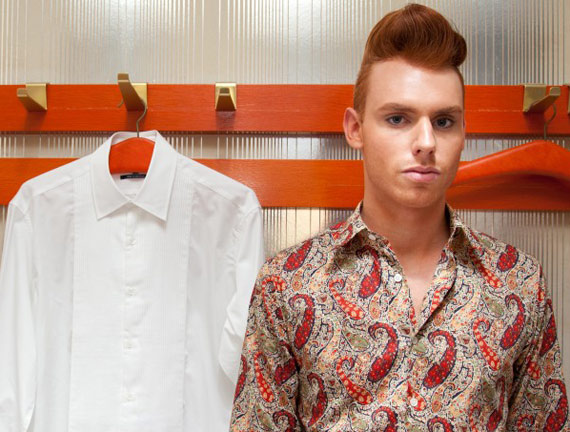 A Second Act for Phillips Shirts

The story behind Phillips Shirts is a familiar one. In 1954, two newly arrived Czech immigrants – Alex Peterfreund and Philip Phillips – began small. They made men’s dress shirts at home, storing bolts of fabric behind the couch and making sales calls that stretched their limited English. In 1958, the company moved to a three-storey factory at 274 Little Lonsdale Street. At the height of their business in the late 1960s/early 1970s, they employed 80 machinists, 2 cutters and 4 pressers. Phillips Shirts supplied clients all over Australia and were known for their superior craftsmanship.

In the post-war period, self-made men like Alex and Phillip could be found in garment manufacturing districts in major cities all around the world. These men and the manufacturing empires they founded are now mostly gone, and with accelerating speed, Phillips Shirts’ familiar rags-to-riches story has veered into unknown territory. Today, Alex’s son Andrew Peterfreund oversees a company of nine machinists, three pressers and one cutter. As markets shrink, the once-large company finds itself small again. How is it possible to compete in a market flooded with cheap imports? How can they hold on? Is it even desirable to do so?

Emma Clarke thinks the answer is yes. Employed in 2007 as a bookkeeper, Emma is the visionary behind a bold attempt to reinvigorate the business. Her secret weapons are Phillips’ enormous repository of fabrics, a skilled workforce, and a floor full of vintage dead stock. The challenge lies in scaling back the large-scale manufacturing plant so that it can nimbly respond to the demands of niche markets.

At the rear of the factory floor are the fabric storerooms, bolts of fabrics stacked ceiling high, many with original tags indicating their provenance. Emma is slowly inventorying this stock, culling the best pieces for Archive, the shop she’s opened in former showrooms at the front of the building. From the early 1960s, Phillips Shirts were produced in Liberty of London’s fine cotton lawn, and these colourful fabrics feature both in the cushions online casino Emma has designed for Phillips’ homewares range and in Phillips’ bespoke shirts. Despite thousands of rolls of fabric waiting in store, Emma is visibly pained when a roll of a particularly loved cloth is used up – fabrics like these are no longer made.

Today, Phillips Shirts is in production three days a week. It’s worth noting that although Emma has fashion sense and financial know-how, she doesn’t sew. Machinist Rosa Salvo celebrated 41 years at Phillips this month. Markar Arzumanian, the cutter, has worked at Phillips for 30 years. Emma relies on “the ladies” (and Markar) to bring her ideas to fruition. In recent times, they’ve made small runs of aprons and hairdressing capes. They make bowties. On the day I visit, they’re making a dozen-plus shirts on short notice for a television commercial. There’s argument about which shirts were theirs in a mini-series broadcast on television that week. Not surprisingly, costume designers love Phillips Shirts.

“My dream,” Emma says, “would be to crank this place back up to five days a week. And I think it will happen, we’ve just got to hold on. I’ve got to wrap my head around, who are the right people to let know about us?” She and Joanna, a part-time marketing contractor, have established a presence for Phillips Shirts on the web and social media. When they opened the factory doors for Open House Melbourne, they were inundated with visitors.

However, nostalgia doesn’t pay the bills. It is true that consumers are often fierce in their desire for old things while neglecting to financially support this existence. Emma’s hope is that they’ll soon be making 50 custom shirts a week. She and Joanna are pressuring Andrew for a marketing budget. They believe in Phillips Shirts’ potential, but know that time may run out. “This is it,” Emma says. “This is the make or break year.”

Carolyn Fraser is a writer and letterpress printer in Melbourne, Australia. She is a regular contributor to UPPERCASE Magazine. She can be found on Twitter as @girlprinter.